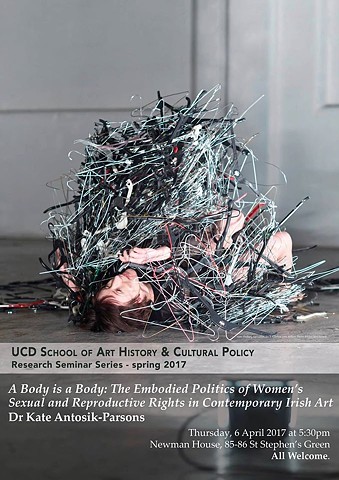 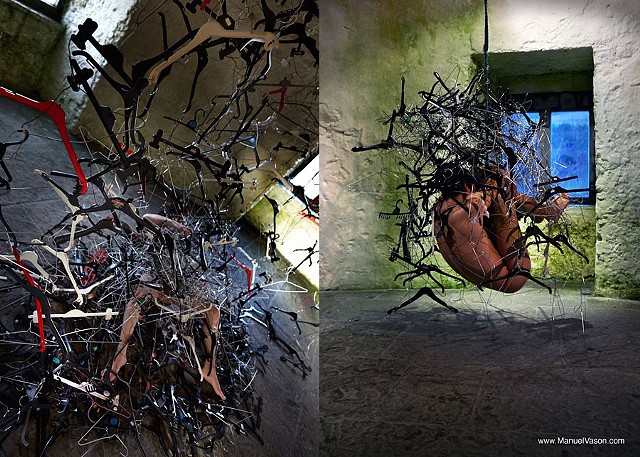 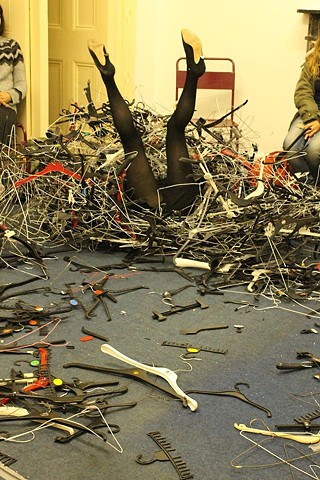 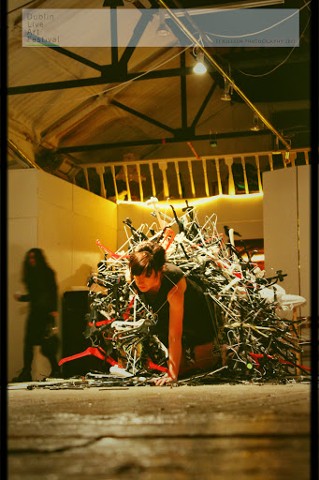 Aspiration deals with the awful reality that so many women die every year from unsafe abortion in the world. I have been addressing the wider issue of abortion and women's reproductive rights in my work for many years as Irish women continue to make England the legal and de facto destination for abortion. This performance is created with 700 clothes hangers. They function as stand-in instruments or proxies for the human body, when suspended they are also like birds in shattering flight. In the performative image my body is entrapped as in a web, receiving birth or giving transfiguration. I struggle with the weight and attributes of this material, manipulating it and seeking to transform it into something beneficial and sculptural.

Aspiration is the action of drawing fluid by suction from a vessel or cavity. Aspiration is also about desire, hope and focus towards a goal.

According to the World Health Organisation 70,000 women die every year from unsafe abortions, performed in countries where abortion is illegal. A WHO article calls safe, legal abortion a "fundamental right of women, irrespective of where they live". The article states "ending the silent pandemic of unsafe abortion is an urgent public-health and human-rights imperative." (Wikipedia "Unsafe abortion")

Aspiration explores the physical body in relation to 700 hangers (1% of the total...) wearing them, entangling with them, pulling them after me like a transcendent burden and entombment within the pile. The performance also incorporates a "song for X" X is the anonymous woman, whose rape at the age of 14 and subsequent court case to obtain abortion 20 years ago was the propeller to the new abortion legislation recently brought into law in Ireland. The installation of hangers also reference's the assembly and amassing of large numbers of human beings, in crowds or swarms or where we see bodies piled in death camps or situations of war and mass murder. The hangers are ubiquitous, so common and normal but they can also be dangerous perilous instruments.