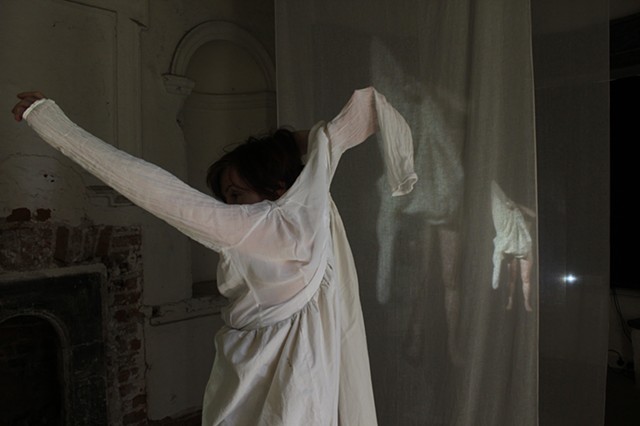 The artist performs a futile and haunted disrobing ceremony with a misshapen dress. Recorded in the 18th Century Roman Catholic Bishop’s Robing Room, Kilkenny in 2012

Performed in memory of girls and women incarcerated in Mother and Baby Homes and Magdalene Laundries in Ireland, throughout the 19th and 20th Centuries. And their lost children

Testimonies of women who lived and worked in the Good Shepherd Magdalene Laundry, Limerick were collected by Evelyn Glynn and voiced by Áine Phillips

Aidan Dunne wrote in The Irish Times, August 2012 of the performance: “Remarkable for the intensity of feeling she brings to her practice, Phillips has in particular explored the iconography of femininity as it relates the realities of experience within inherited structures that determine political, religious and gender identities.”

Áine Phillips is a performance artist based in Galway, exhibiting and performing in Ireland and internationally since the late 80’s. She creates work for multiple contexts; public art commissions, the street, club events, galleries, theatres and museums. Her work is powered by feminist philosophy, ethics and politics: using art to comment and make propositions on subjectivity, gender and social change.

She is also a writer and teacher, promoting and advocating for performance and live art as a creative force for cultural and personal transformation. She has worked extensively as a curator and organiser of performance events in Ireland and the UK. She is Head of Sculpture at Burren College of Art since 1999. In 2015, she produced and edited 'Performance Art in Ireland: A History’ (Live Art Development Agency/ Intellect Books UK) and publishes regularly in visual art journals, books and online platforms.

Her performative video works and art films have been screened internationally at festivals and exhibitions. Her work has been supported and collected by the Arts Council of Ireland and the National Museum of Ireland.