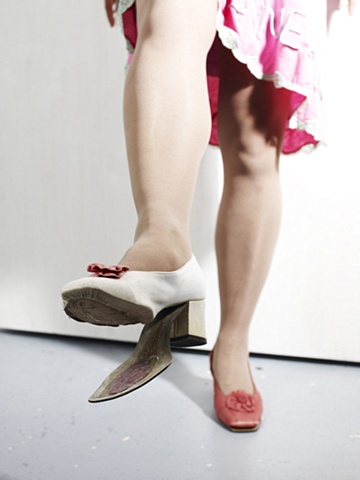 35 years old mother of two. Violated and killed in 2002. The Gulf of Mexico. She is classified as the victim of a serial killer.

Mercedes is worn by Yosiko Shimada, her materials are a portrait, text which reads the endlessness of meaningless. A pair of shoes with unclosed, unsealed soles. Her soul is open. Broken mirrors to reflect time, places, many lights and images. Sulfur the chemical element abundant, multivalent non-metal. Sulfur, in its native form, is a soft bright yellow crystalline solid. In nature, it can be found as a pure, essential element for life it is used in black gunpowder, matches, it can also be referred to as brimstone. Burns with a sky blue flame.

Mined at hot springs in the gulf of mexico Sulfur is present in meteorites. Pure powdered sulfur is used as a medicinal tonic and laxative. Sulfur isused in baths for people with seizures.

The mineral Sulphur is found in every cell of the body. Sulphur is concentrated in the hair, skin and nails.&#8232; Sulphur has a deep influence on systems of the body making cures burning heat on skin, red rimmed inflamed eyelids, shortness of breath in the middle of the night or the sensation of a load on the chest,