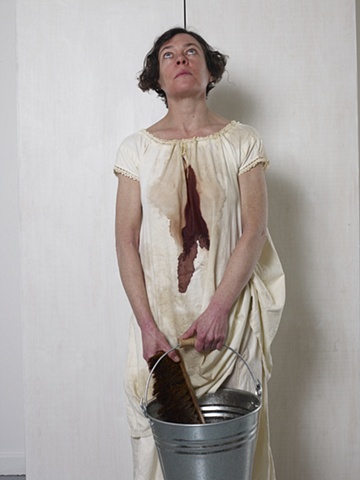 Magdalene Asylums in Ireland (1800's - 1996) were institutions for so-called "fallen women" prostitutes and girls in moral danger, unmarried mothers, developmentally challenged women and abused girls. Even young girls who were considered too promiscuous and flirtatious, or too beautiful, most of them operated by the Roman Catholic Church. The inmates were required to undertake hard physical labour such as laundry work and observe strict silence. It has been estimated that 30,000 women were admitted during the 150-year history of these institutions, often against their will, sometimes by state order. The last Magdalene Asylum in Ireland closed on September 25, 1996.

Magdalen is represented by Jane Talbot, her materials are linen undergarments, blood, first born baby milk, water, scrubbing brushes. In these materials is the paradox of being both alive and inert.

``She simply disappeared into the system."

As her mother was ill and her father couldn't get work Maria Madden and her two brothers and one sister were all put in orphanages in the late `40s. During this time both her parents died. Maria remembers nothing from the age of five to 11. Then she remembers too much.

The stories come out in parts, as though they're caught in a mesh. ``People say I should forget my childhood, but should they forget theirs? Should we only talk about childhoods if they are happy ones?'' Maria was put in the school laundry at 11 or 12, ``a frightening place, with big basins, a tank and dripping water''. In the laundry she washed the nuns and childrens' own clothes. Next door in the furnace the clothes were dried and she would `tease' the straw in mattresses before putting it back in again.

``Someone said to me `it's like something out of Dickens' and it made me think, am I being believed here, because it's not something that far back, it's something much nearer than that.''

Two images relating to her childhood come from Maria Madden as she talks. One is a recurring nightmare: she is being sucked out the landing window of St Ann's by the wind. In the other, she is looking out the same window saying, ``I want to be the birds, I want to be the trees.'' Both are still with her.